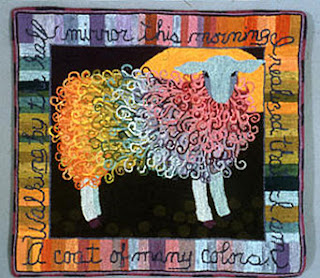 Patty Yoder's hooked rugs are  on show in Shelburne, Vermont until the end of October. The show is called "The Alphabet of Sheep" and you can read about it, and see more photos, here (from which the picture comes). She published a children's book of the same name in 2003, but unfortunately it's out of print. 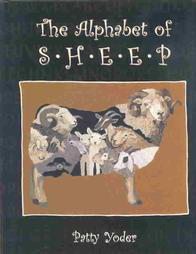 Patty Yoder (1943-2005) created whimsical rugs with an acute attention to detail and an aesthetic eye for color. Born in Nebraska and raised in Ohio, Patty acquired her passion for the traditional art of rug hooking after she and her husband Ramsey retired and moved to a farm in Tinmouth, Vermont.

Together they began to collect rugs, particularly from Esther Knipe, a self-taught hooker, that fueled Patty’s inspiration. Yet it was not until 1992, five years after Esther’s death, that she began to make her own creations. Between 1992 and 2005 she completed a total of 44 rugs.

The Alphabet of Sheep series combines two of her favorite things: the sheep on her farm and the alphabet. Her rugs incorporate her family, friends, or sheep as the subject matter, a joyous celebration of one woman’s life. Through her affiliation with the Green Mountain Rug Hooking Guild, Patty helped to continue contemporary interpretation of this New England artistic tradition.
Posted by Margaret Cooter at 01:06 3 comments: 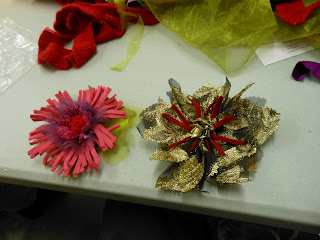 Today, at our meeting at Craft Central,  Janet K created these wonderful corsages from scraps of wool, exotic fabrics and ribbon. They are  beautiful and I am sure the recipients will be delighted to receive them ....
Posted by Jill Dian at 14:20 2 comments: