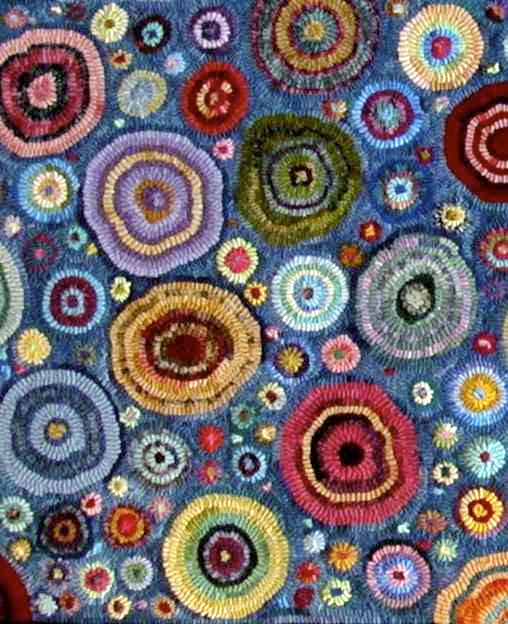 Looking for hooking inspiration, I came across this on Gene Shepherd's blog, where you can see how to get the loops to behave. What a great way to use up scraps - perfect for all the bits of wool I've collected from the Craft Central scrap boxes.

It doesn't remind me of cats' paws at all, though - more like "starry sky" - you'll surely recognise the famous picture this comes from - 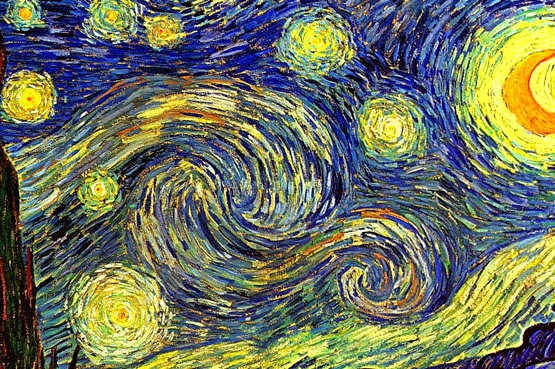 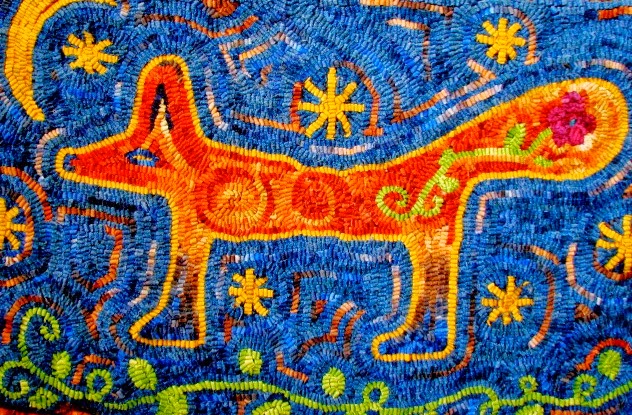 Emily Carr (1871-1942) was a Canadian artist who studied in England for a while. She painted on the west coast of Canada - landscape, especially the forests, and Indian villages and totems - and her individual style was rediscovered in the late 1920s. She called herself "the little old lady on the edge of nowhere".

After a not very successful exhibition in Victoria in 1913 she needed to earn extra money, so she raised and sold sheep dogs, hooked rugs, and created pottery based on First Nations designs. 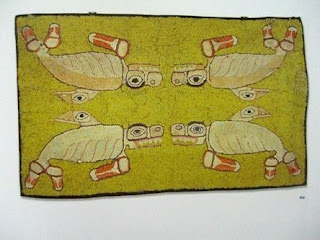 I've written more about Carr here, and Vancouver Art Gallery's website has good biographical information. There will be an exhibition of her paintings at Dulwich Picture Gallery, south London, later this year.
Posted by Margaret Cooter at 08:06 1 comment: 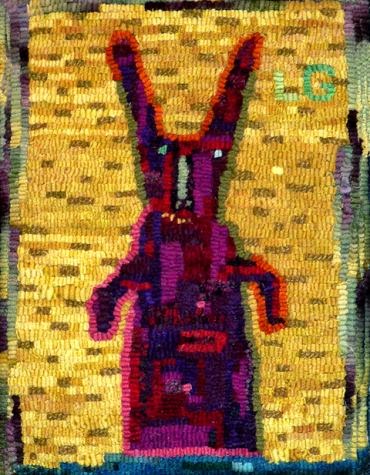 "Leslie Giuliani hooks rugs with a contemporary folk feel" says the blurb for the article in Hand/Eye magazine. See all the photos and read the article at http://handeyemagazine.com/content/modern-hooker, or check her website - www.lesliegiuliani.com.
Posted by Margaret Cooter at 08:48 4 comments: 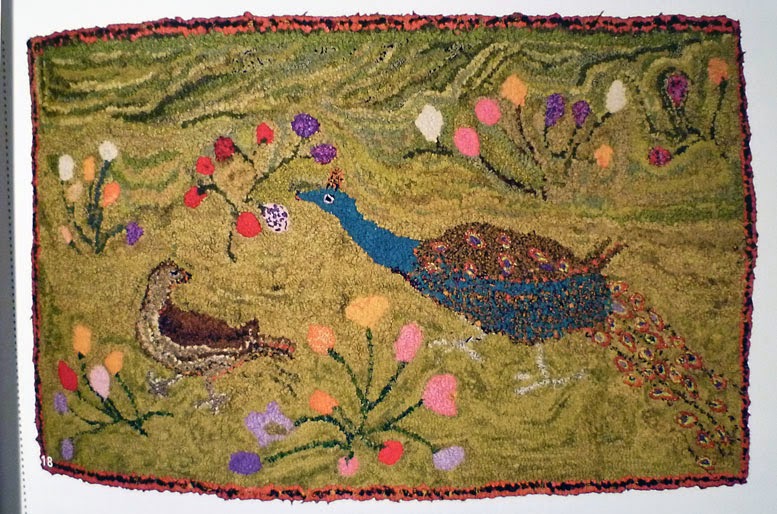 "Peacock" was designed by Winifred Nicholson  and hooked in 1970 by Florence Williams; it measures 34"x54", and the slightly bent shape is because it's photographed from a book, "Rag Rug Creations" by Lynne Stein. The caption says the rug was inspired by a mosaic in Ravenna of the same theme, colour, and composition . The flowers especially don't look as though they're from a mosaic ... they seem very much in Winifred Nicholson's painting style - 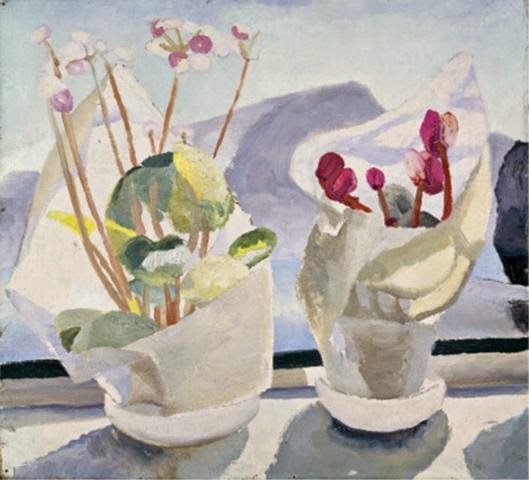 Email ThisBlogThis!Share to TwitterShare to FacebookShare to Pinterest
Labels: artists

12 ways to recycle fabric into rugs

Re Rag Rug is an experimental design project that explores the social and environmental sustainability of the rug. The project started in August 2012 by Katarina Brieditis and Katarina Evans. In 12 months, they created 12 unique rugs using 12 different textile techniques. Their materials were old clothing and scraps from the textile industry — fabric that otherwise would have been discarded.
They used different types of rags in combination with a variety of textile techniques: sewing, crocheting, knitting, macramé, rolling, cutting, appliqué, embroidery, structure and relief effects, three dimensionality, color and dyeing techniques - and they also experimented with scales. This resulted in 12 new types and expressions of rugs.
"Many of the rugs were made with craft techniques that didn’t require large spaces or machines and could therefore be manufactured as cottage industry in textile producing countries," they say. "Via this mode of production, using waste is environmentally sustainable while socially sustainable. At the same time, the production becomes a platform for developing crafts and creates jobs."
(info from handeyemagazine.com/content/re-rag-rug, photos from reragrug.blogspot.se, where you can see all the rugs ... none of which is hooked!)
Posted by Margaret Cooter at 11:35 2 comments: 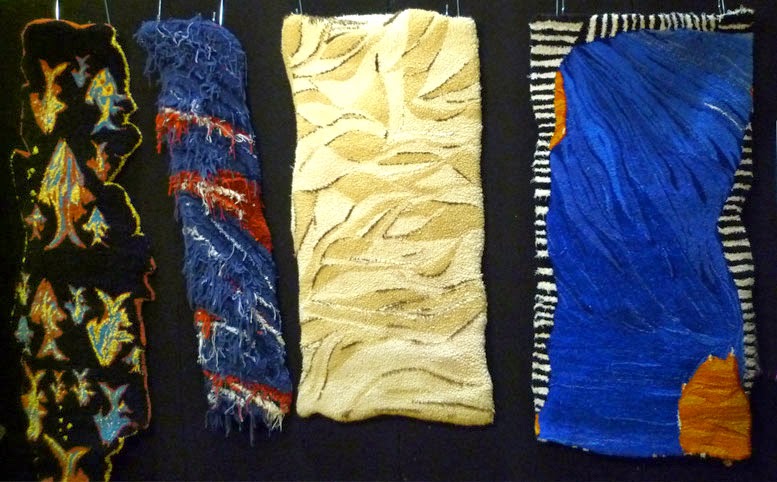 Ingrid had a big stand, with examples of knitty and crochet ways to make her huge balls of fabric strips into rugs ... and huge needles to make them with - 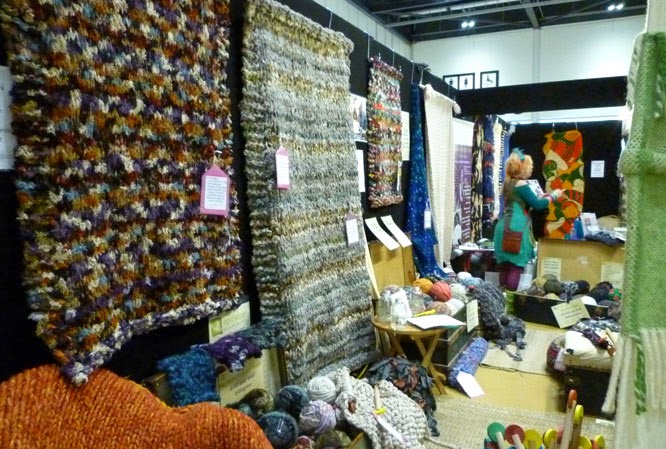 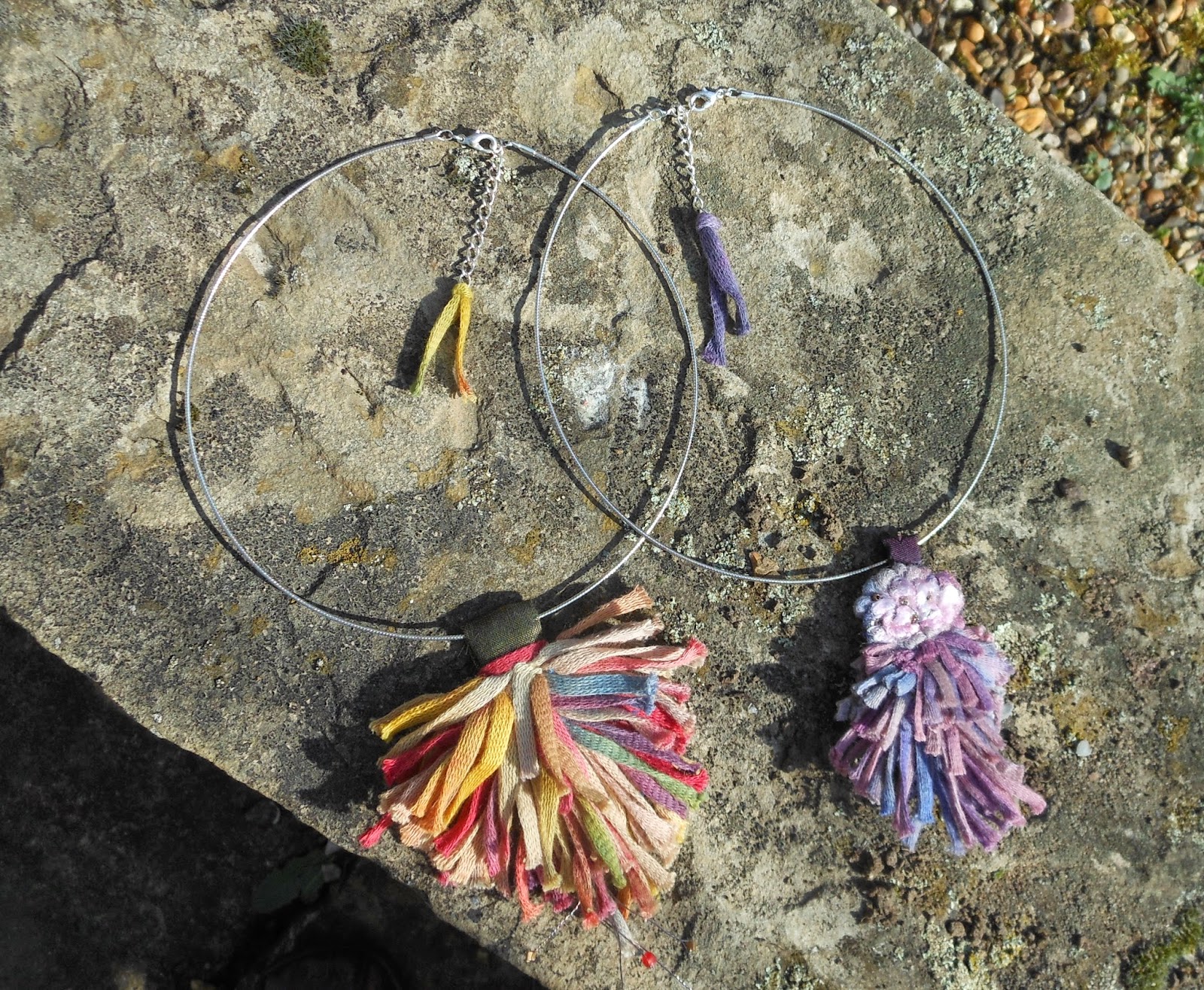 I've not done much rug hooking lately as I've been busy studying for an Art History degree...however I just found these two remaining Necklets which were exhibited at The Knitting and Stitching Show awhile back ..I made them using a rug hooking technique!

It is such a beautiful day I took this photo whilst out in my garden a few minutes ago....Happy April Everyone....Jill 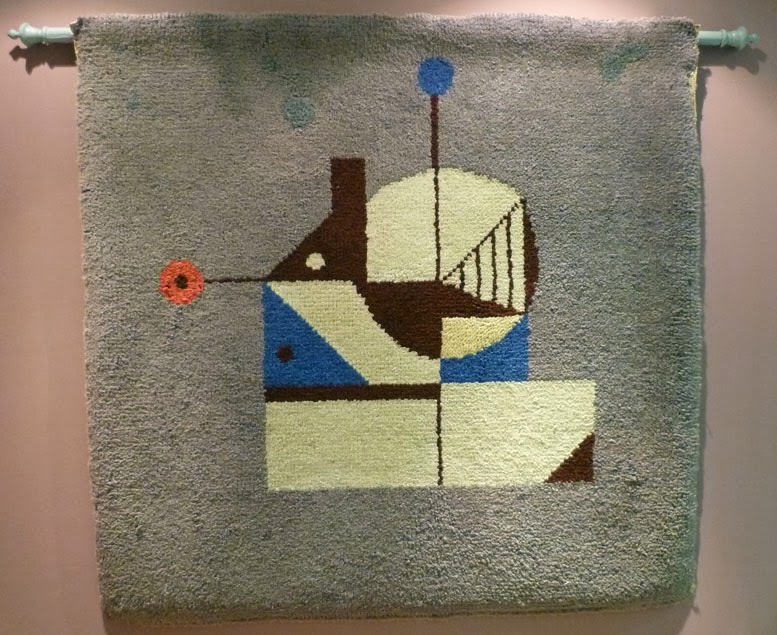 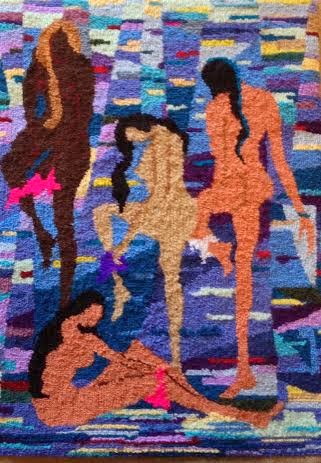 "Changing", size 14" x 20", is by new member Jeroo Roy. She started and finished it between meetings!

She says, "I am an artist and my medium has always been paint brushes and papers and canvas. But due to eye problem, further enhanced by effects of 'Stop Smoking' pills, I had not touched a paint brush for more then a year. But last September when I was in Canada, my friend Helen Dyer who now lives in New Brunswick, took me to Deanne Fitzpatrick’s shop in Nova Scotia and it was there it occurred to me and I can paint pictures through rug hooking."

Her website is www.jerooroy.com.
Posted by Margaret Cooter at 08:15 2 comments:

Who says rugs have to be symmetrical? - this is "Circus Snails" by Lori Lupe Pelish - 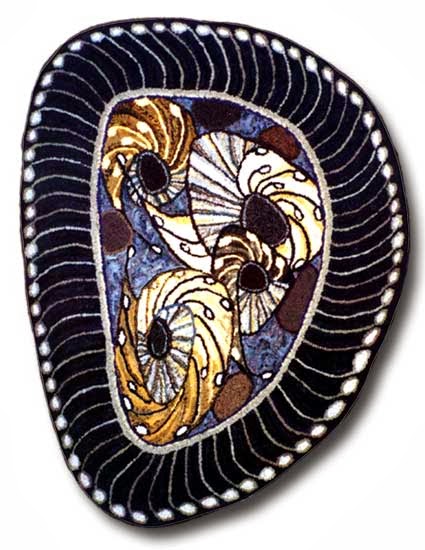 Lori is also a considerable quilter. See more of her rugs in the Rug Gallery on her website.
Posted by Margaret Cooter at 08:07 1 comment:

TIGHR - The International Guild of Handhooking Rugmakers - began in 1994 in London, England, with a group of international friends who decided to establish a world wide group involved in rugmaking.

Email ThisBlogThis!Share to TwitterShare to FacebookShare to Pinterest
Labels: groups and associations

I just found this lovely piece of rug hooking via Facebook.... 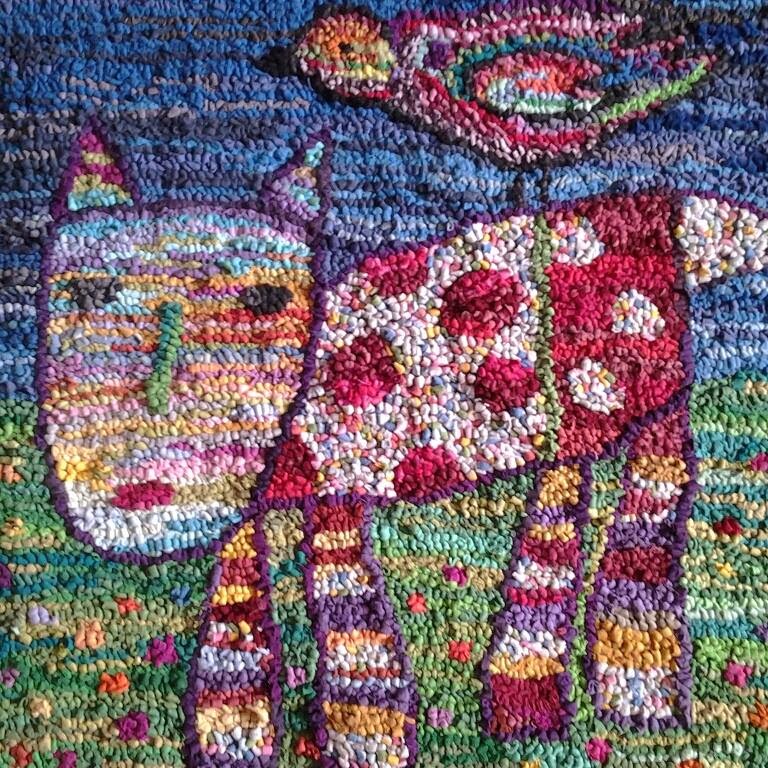 Thanks for allowing me to share this Sue....Enjoy February - Jill
Posted by Jill Dian at 14:01 4 comments:

New link in the sidebar 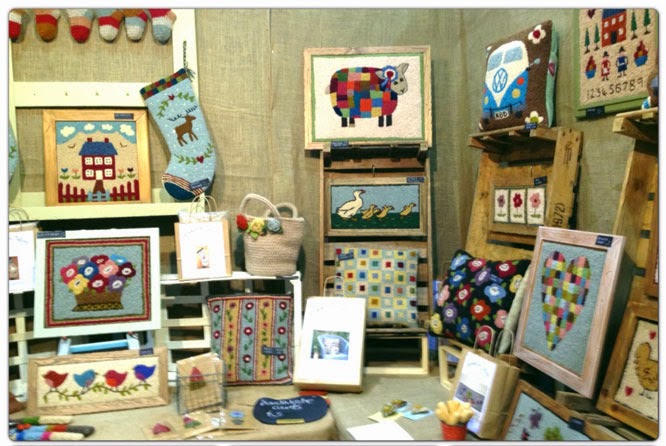 "Hooked by Design" is based in Skipton, North Yorkshire. Its fresh and pleasing designs and kits can be seen at stitching shows (the pic shows the display at Harrogate in November) as well as its online shop.
Posted by Margaret Cooter at 09:49 1 comment:

Email ThisBlogThis!Share to TwitterShare to FacebookShare to Pinterest
Labels: shops

Our rug hooking friend Deb Burcin has helped set up a new website for Cindy Irwin.....

www.cindyirwinrughooking.weebly.com  she thought you might like to visit this site...Jill
Posted by Jill Dian at 06:21 No comments: 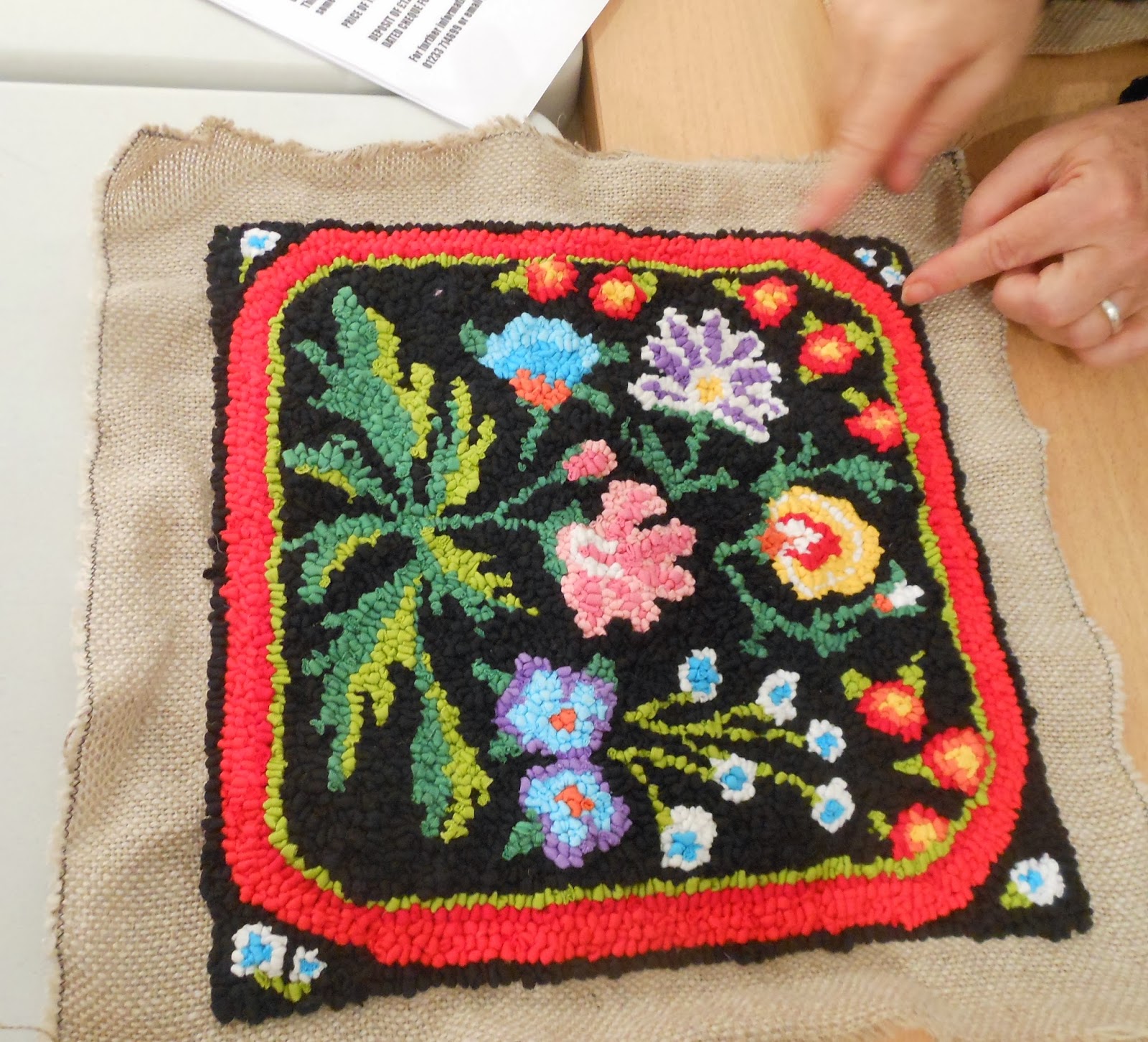 This beautiful hooked piece of artwork was created by Janet K  - thanks for sharing it with us all at our meeting this afternoon at Craft Central in Clerkenwell, London. (January 11th 2014) 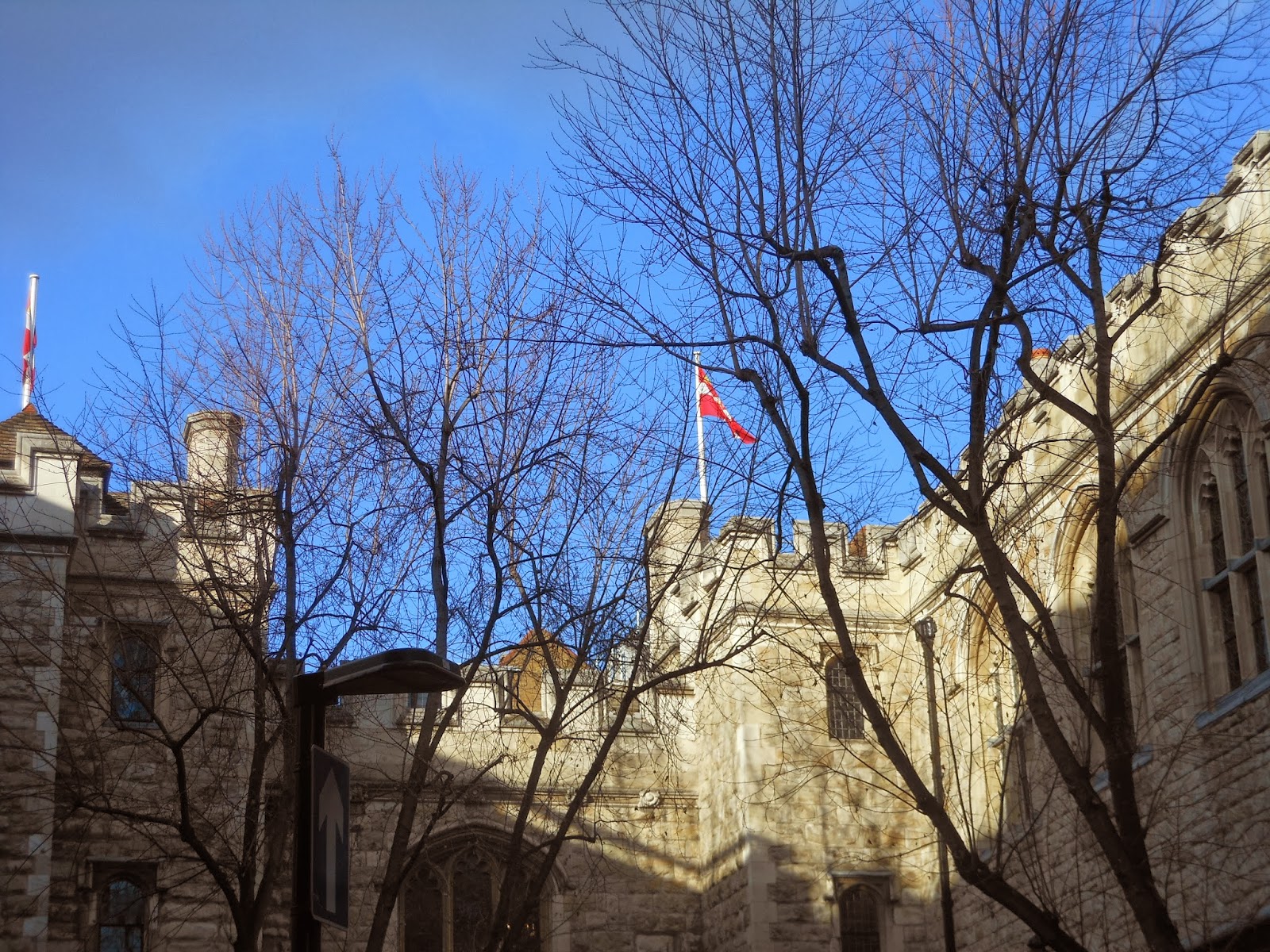 Our meeting place is just beyond St John's  Archway.
Jill